The products were added to your cart
Continue Shopping Show Cart 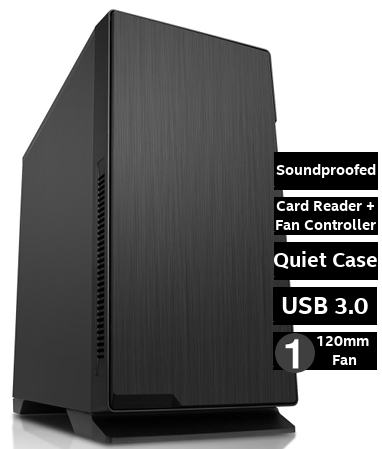 The Palicomp AMD Gravity - "An Overclocked speed demon of a system with a fine supporting cast of components and chassis". We were given a open budget by the Magazines, we decided that for the average all-rounder PC you would be expected to pay upto £800.00, so we decided to choose the latest AMD Ryzen technology and opted for the Ryzen 5 1600 which had it's capabilities pushed  for performance by overclocking it to 3.7Ghz. As we wanted this to be a versatile option, Quiet, neat looking, punching power and capable of Gaming we decided to provide this with the GameMax Silent Gaming case, the extravagant name says it all!. the main competitor to this processor is the Intel i5 range, due to AMD getting the technology out in the open, the Ryzen's are becoming more dominant now for a great all rounder. The popular Nvidia GTX1060 3GB  Graphics it can take on gaming or just about anything else you throw at it at reasonable settings. The 8GB of 4 RAM is generally the average amount of RAM included in majority of modern day PC's so this is more than adequate, but you can easily future-proof with the option of 16GB or more. The SSD and HDD tag team gives the best performance for Windows and the games can be stored on the 1TB, but always a good upgrade to change this to a Hybrid drives if you want to cut the load times down. The beauty of these is that it will give you faster map load speed for non-stop performance and non-stop play. Get the kick of an integrated solid state drive (SSD) with the massive capacity of a desktop hard drive. A Samsung 24X DVD+/-RW drive included to take care of all reading and burning needs for CD's and DVD's. Supplied with Windows 10, 8.1 or 7 64Bit fully installed as standard ready to go out of the box and the disc is provided for future re-installations.
Ideal for: Mid Gaming / Home Entertainment/ Office use
Recommended Upgrades ADVANCED - OS Tuning For Best Performance For Windows 7+8+10 / NVIDIA GTX1070 8GB / 500W PSU - FSP 80+ Bronze - 85% Efficiency (Mid Gaming)